How to get pastel colors in your photos 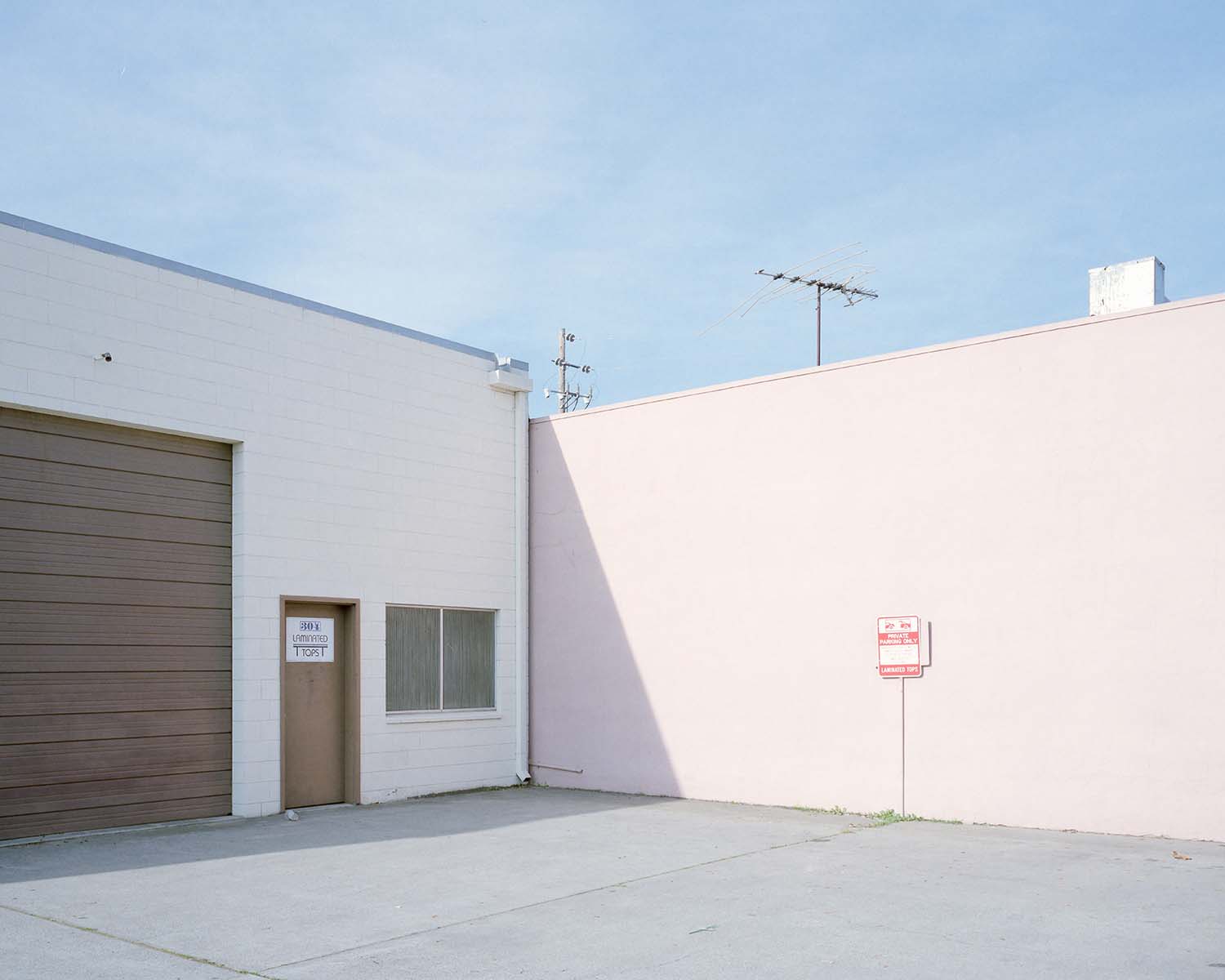 Recently, I've gotten a fair number of direct messages asking what it is exactly that I do with my photos to get their pastel tones. It took me about a year of trial and error to get to where I am, and I'd hate for anyone to waste their time.

Before jumping into how I actually do this, I'm going to take a step back and rigorously define my goal. First, it makes sense to define what pastels are: they're colors that are bright but still saturated. I'm really looking for a way to make images with as little contrast and as much light as I can manage without causing them to look too unnatural. Every step I take is motivated by this goal.

Ultimately, getting pastel colors in a photo comes down to three things: 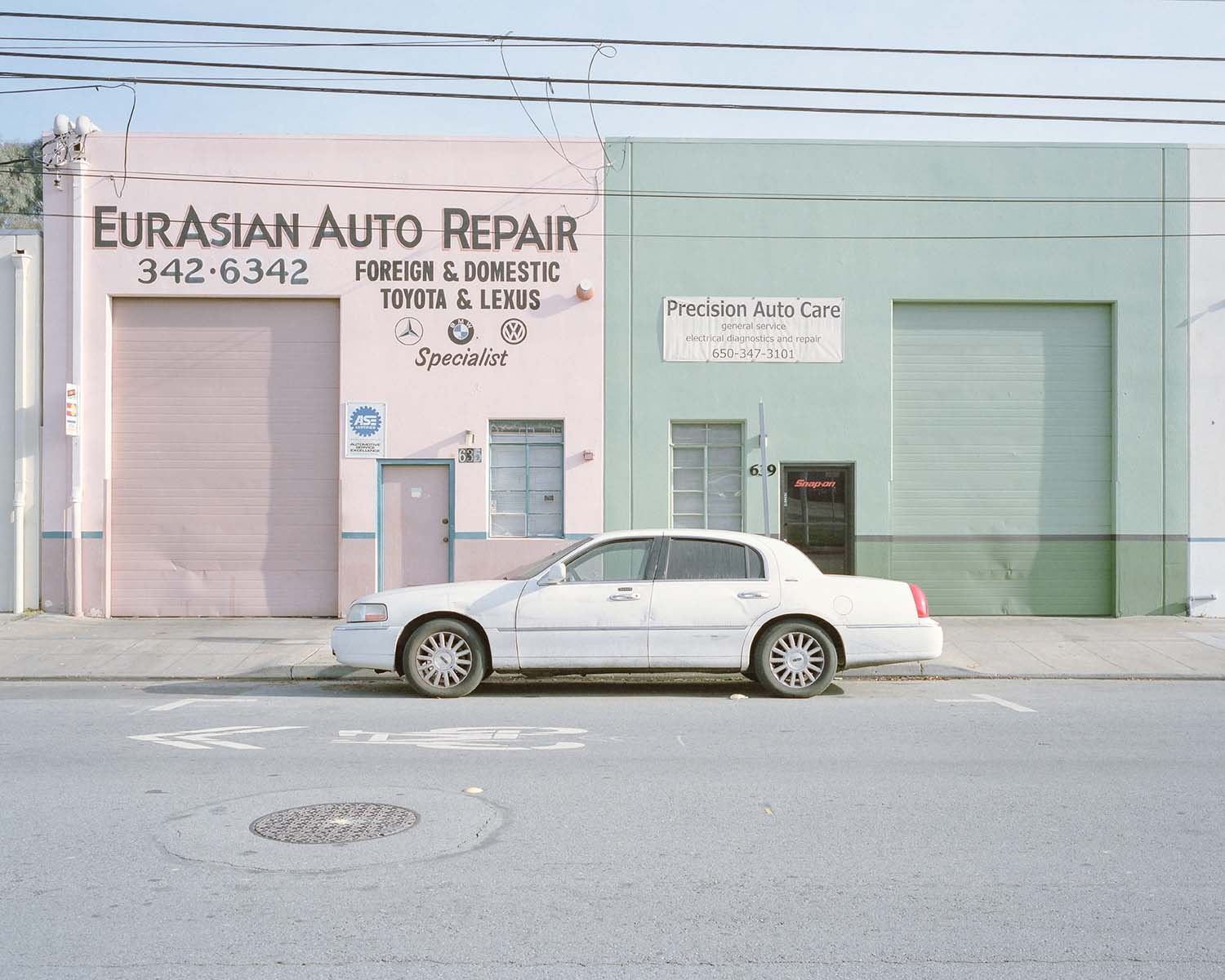 When I first began my search for pastel colors, I found myself frustrated that certain scenes seemed impossible to give the pastel treatment. It was only after many failed attempts that I realized that some photos don't lend themselves to a pastel aesthetic. Making sure a subject is lit correctly can make the process much easier and save you from later headaches.

Subjects lit directly by the sun (when the sun is to your back) are easiest to give a pastel rendering. The ideal day for pastels is just a tiny bit overcast or hazy so that the sun's light is made slightly less intense, resulting in lower contrast. These conditions are rare, through, and for most scenes, full sunlight will work just as well.

The best time for pastels in an urban environment is between mid-morning and mid-afternoon. The sun will be close to directly overhead meaning that most subjects will be illuminated without reflecting blinding rays at you. While subjects lit by a rising or setting sun will very often be beautiful, they're typically far too contrasty for a pastel color palette to work.

Though it's possible to get pastel colors with a subject that's backlit (when the sun is facing you), it is typically difficult. I would recommend waiting until you have a high level of comfort with easier scenes before tackling backlit subjects - you'll spend a lot less time treading water. 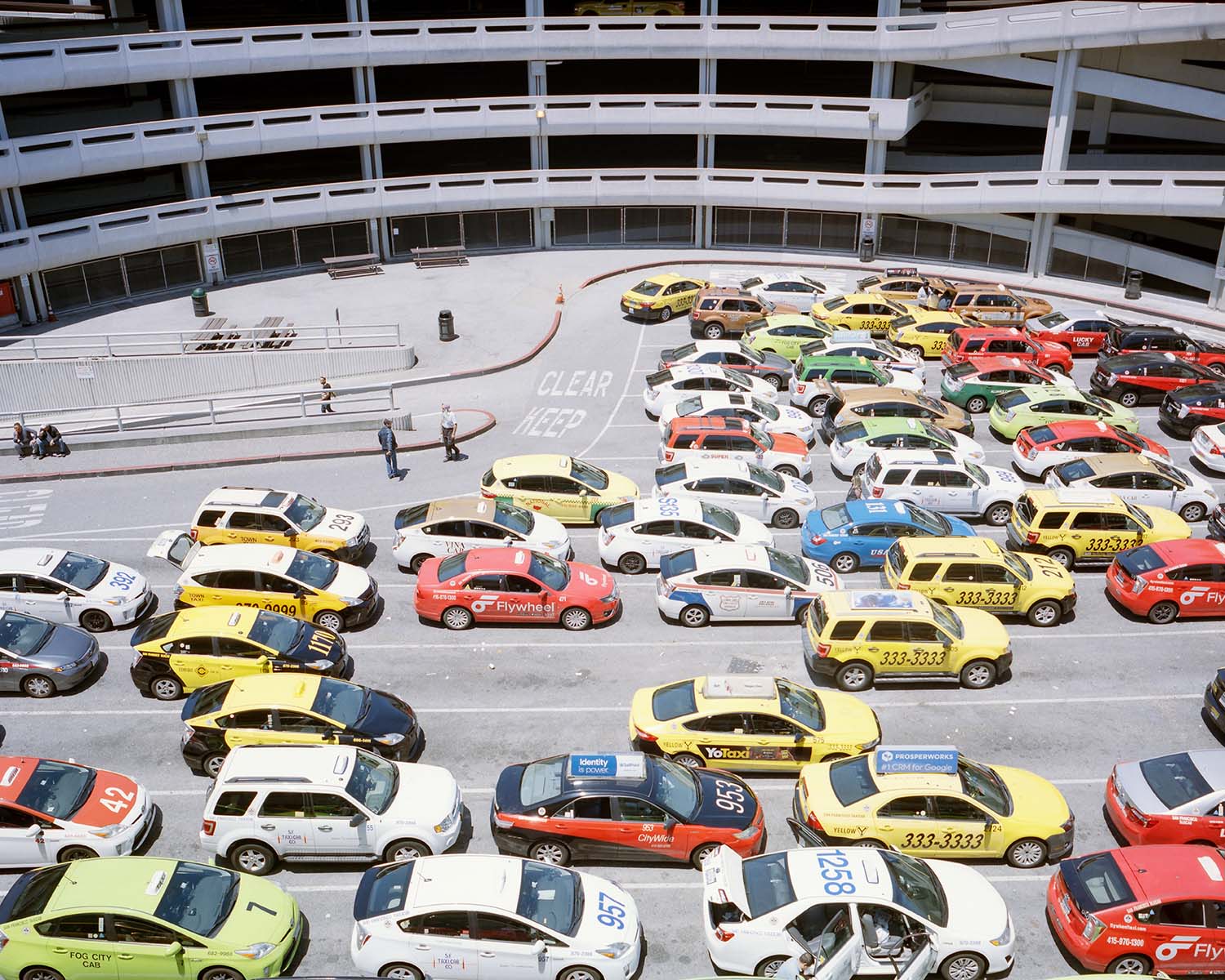 For film, choosing the right exposure means starting out with a low-contrast film like Kodak Portra or Fuji 400H. Not only are do these films naturally have lower contrast, but they also have tremendous dynamic range - that is, they can retain lots of detail in both an image's brightest highlights but also in its darkest shadows.

Perhaps the best advantage you can give yourself is to overexpose whichever film you're using by at least 1 stop. For example, if you're using Kodak Portra 400, an ISO 400 film, set your camera's meter to ISO 200 or lower. Overexposed negative film retains highlight detail while increasing the detail visible in shadows, and it has lower contrast that "properly" exposed film. An overexposed negative of the right kind of subject will oftentimes yield perfect pastel colors without any editing necessary.

Scanning is another important consideration. You don't need a particularly expensive scanner to get pastel colors and fairly high-quality scans on medium format film; I use a cheap consumer flatbed, a Canoscan 9000f II. For 35mm, you'll want to use a dedicated 35mm scanner or a lab. When scanning for yourself, use 16-bit per channel files. This gives you more information at each pixel, and it makes your color transitions more subtle - a critical detail for pastels.

If you have a lab scan your negatives, ask for low-contrast scans and explain the look you're going for. Labs have a lot more influence on your images than you might expect, and their staffs are usually happy to scan your images with the look you want.

For digital, set your camera to whatever the highest-quality file your camera has, preferably raw. The extra information in raw files will allow you to retain highlight and shadow detail, and this means that you can make a more natural-looking low-contrast image. For the actual exposure, get as much light as you can without blowing out the highlights. Be careful, though - overexposed digital images are ugly, and it's nearly impossible to fix them. 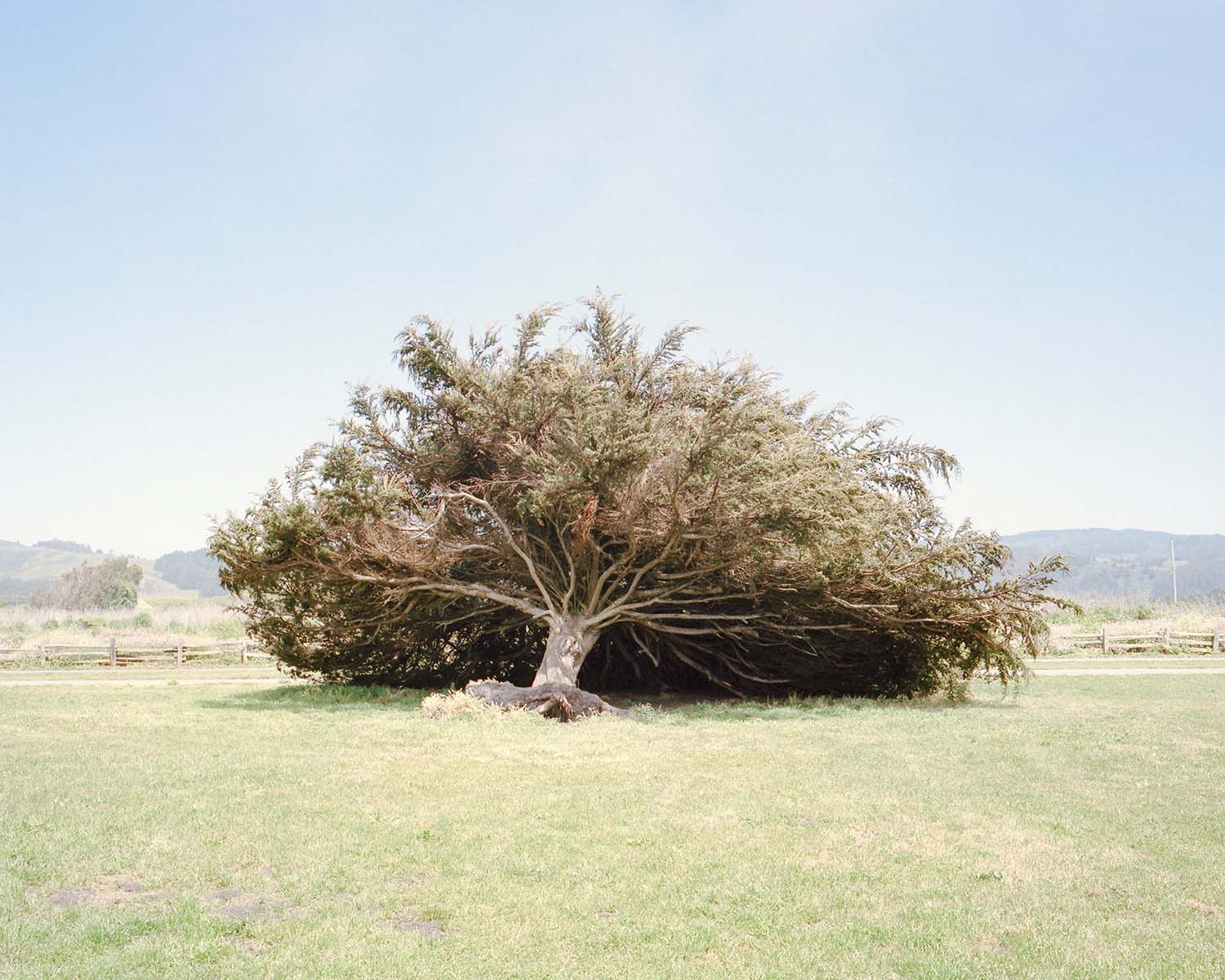 Now that you have a well-exposed exposed image, all that's left is to make final adjustments in your software of choice. It's possible to edit in pretty much any photo software, but I think it's easiest in Lightroom and Capture One.

My last adjustment is to make the darkest shadows completely black. We percieve color and light intensity with respect to neighboring regions, so if you make sure to include even a small part of your image that's completely black, it makes the light parts look comparatively brighter. This helps give the pastels some extra life. In many cases, retaining some black in the image makes it look more natural, too.

I'm going to run through an example image. 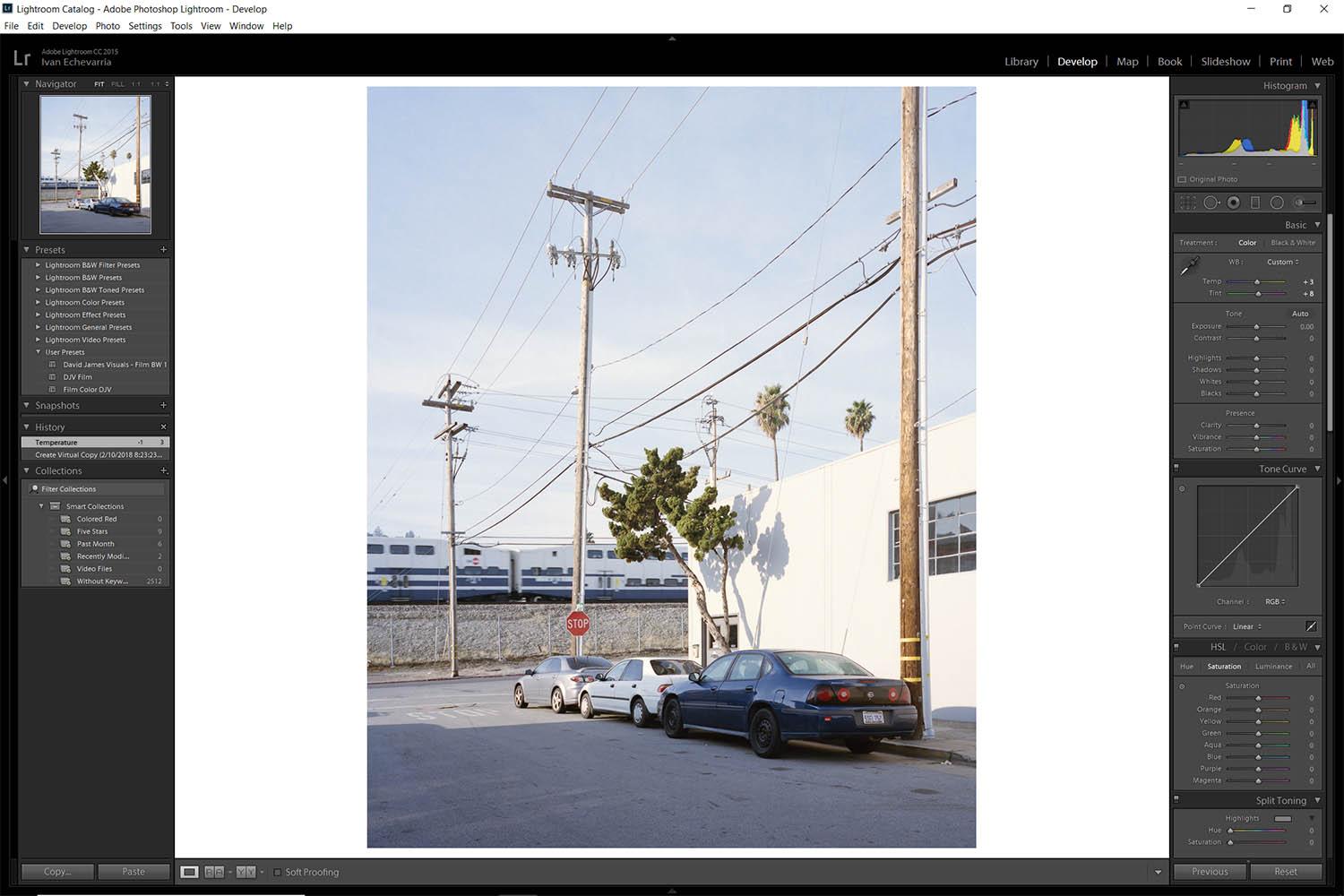 Here's my base image with basic white balance, cropping, and straightening already done. The sun directly lights most of the scene, and the negative was overexposed and scanned at 16 bits/channel. It actually looks pretty good without anything done to it. Still, it could stand to be brighter - the shadows in particular are a little dull. 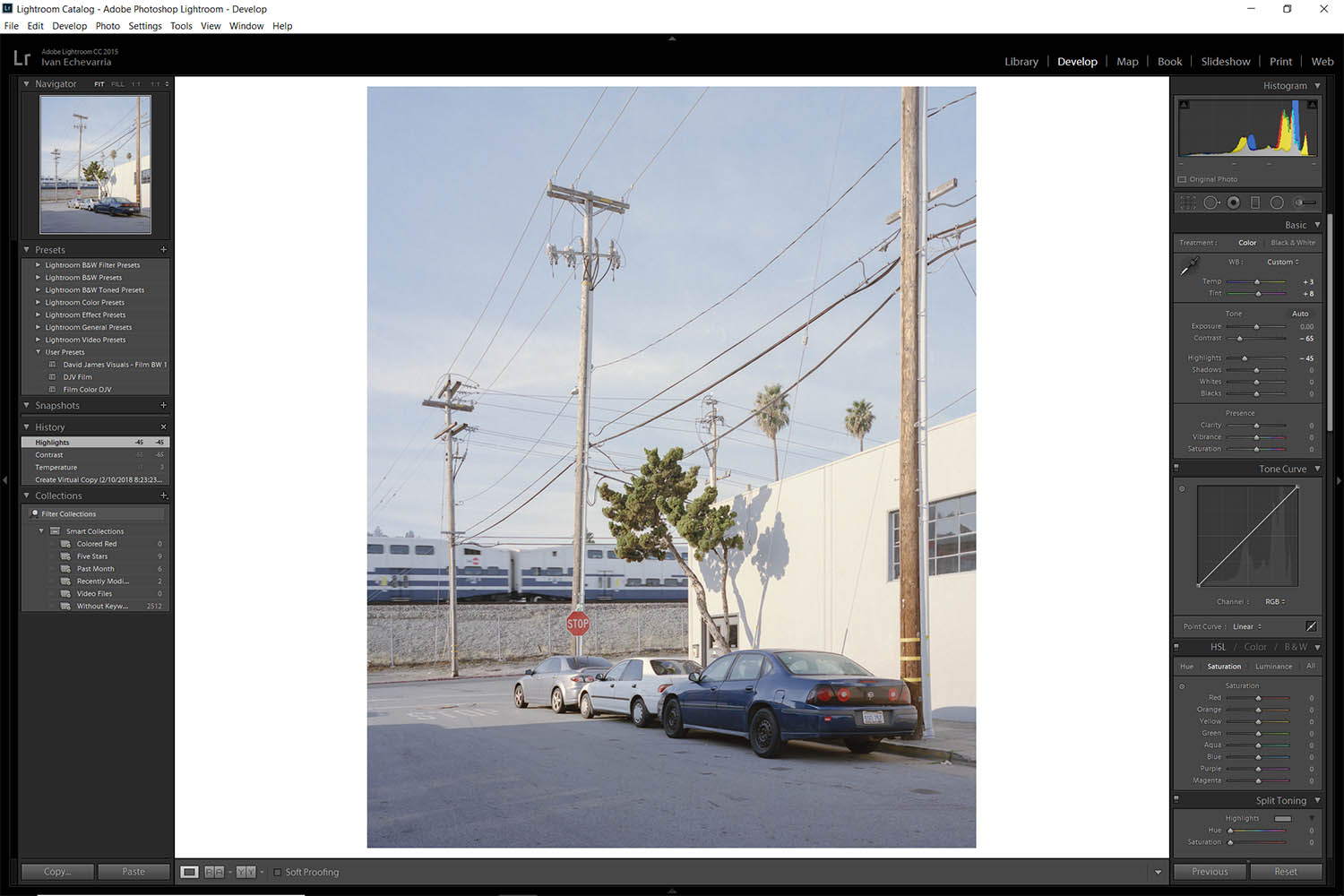 First, I reduce the contrast by adjusting contrast and highlights sliders. For this photo, I adjust contrast by -65 and highlights by -45. Notice how the histogram in the top right corner is compressed; that's a sign I'm moving in the right direction. 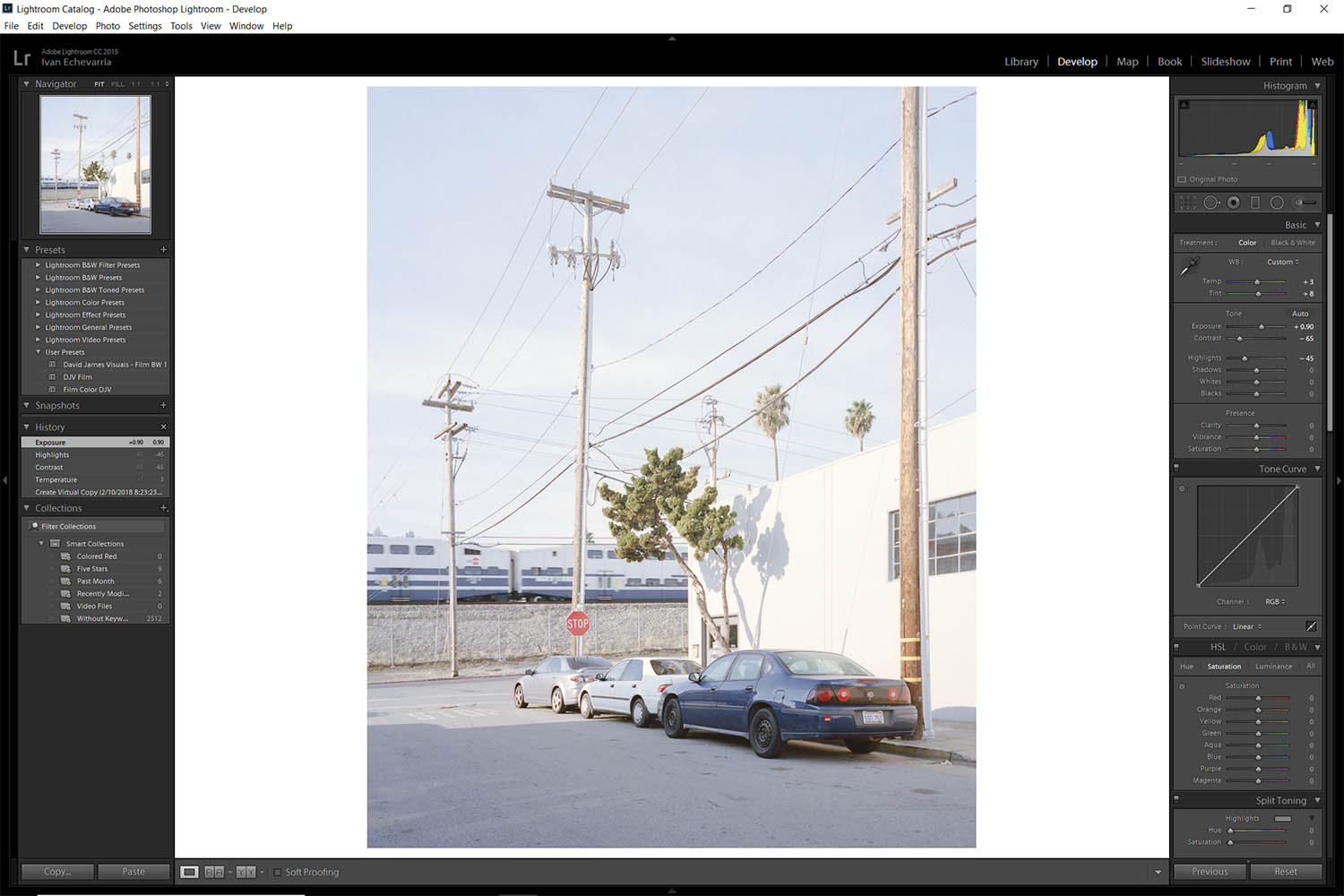 Next, I increase the exposure, in this case by 0.9 stops. Again, note the shape of the histogram - it's compressed and closer to the right edge. The photo still looks funky, though. While the midtones were pretty much where I want them, the darkest shadows are distractingly bright. Right now, the image looks dull and overprocessed.

Lastly, I adjust the black slider; here, a value of -70 looks good. The darkest parts of the image are now more natural-looking, and bright parts appear more lively in comparison. Again, the histogram is a solid indicator of how I'm doing: in this case, it shows that at least some parts of the image are completely black with the majority of the image quite bright.

When starting out, and even when you have a fair bit of experience, it's hard to make all the adjustments in one fell swoop. I typically go back and forth between contrast, exposure, and black values, experimenting until I find something that looks good. The edits you'll need are deeply dependent on the individual image, so you won't be able to rely on a single preset for pastel colors.

I hope you've found this useful and that it sends you in the right direction. If you have any further questions, don't hesitate to direct message me on Instagram. I wrote this post in response to questions, and I'd love to have more material to write about.